ves, Inc. was founded in August 2005 as Chesapeake Native Nursery by Sara Tangren and a group of volunteers on a farm near Davidsonville, in order to promote the local flora of the region. This group became Chesapeake Natives, Inc., a Maryland 501(c)(3) 170(b)(4), on October 10, 2006. CNI won several significant grants and contracts in that year and moved to the University of Maryland-College Park Campus’ old greenhouses, and when completed, into the new UMD Research Greenhouse Complex. By 2011 at College Park CNI produced about c.5000 perennial herbs covering about 80 species. It also maintained several demonstration gardens off-campus and several on-campus for the University’s Botanic Garden and Arboretum.

In July 2011 was reorganized and revitalized under its new Executive Director, Rochelle Bartolomei and she brought the company through several years of transition from the College Park Campus to Rosaryville State Park, via Pope Farm 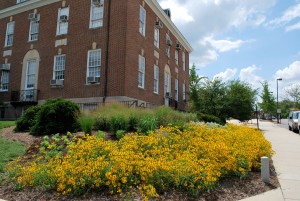 In April 2012 CNI moved northwest from the University of Maryland to Montgomery Parks and Recreation’s Pope Farm in Gaithersburg, while looking for a more permanent home, which it found in Rosaryville State Park in September 2012. Our volunteers, most who live in Montgomery and Howard Counties, established an active unit for growing perennial native plants at Pope Farm. This work, and our close collaboration with them, continues today – the operation being created by CNI and now headed by our own Rochelle Bartolomei.

In September 2012 the Mt. Airy Mansion Greenhouse in Rosaryville State Park, Prince George’s County, was largely overgrown with brambles, vines and shrubs and trees. Over the next three months, CNI volunteers and members of the Rotary Clubs of Upper Marlboro, Capitol Hill and College Park, brought down the overgrowth and made the space usable for a plant nursery.  Growing native plants at the site commenced in Spring 2013.

In February 2013 CNI obtained a User Agreement from the Rosaryville Conservancy for the greenhouse at Mt. Airy Mansion to commence our planned plant propagation and environmental education programs. At Mt. Airy Mansion CNI has been more able to reclaim the objectives of the organization that were largely unavailable to us at Pope Farm, such as providing a revenue stream from plant sales, and in greater visibility for educating the public in the value in environmental restoration.

Much has been achieved in the seven years that CNI has been at the Mt. Airy Mansion Greenhouse. Moving to the south end of Prince Georges County meant building an entirely new team of regular volunteers from the District of Columbia, Prince Georges, Montgomery,  Anne Arundel, Charles and Calvert Counties. Today CNI has a new strong and vibrant core of volunteers, carrying out all aspects of greenhouse management, and enabling maintenance and plant sales throughout the year. We have established several demonstration gardens, reclaimed a quarter acre of forest, resurrected nursery production, 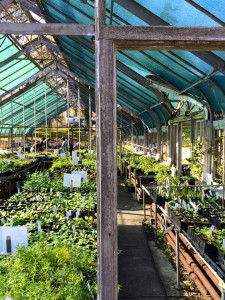 For two years working with little covered space it was time to provide a little more shelter than shade cloth. So in December 2014 and into January of 2015, we constructed of a hightunnel hoophouse over the removed section of the greenhouse. The completion of the hightunnel now provides us with a enclosed section of greenhouse where we are able to propagate our seeds earlier in the season, and work during inclement weather.

In 2014 we began selling shrubs and trees in addition to our regular herbaceous perennials. We have also begun cultivation of native aquatic plants in the mansion’s repurposed swimming pool. Our current 2020 local ecotype production estimates will be ~30,000 plants, covering over 150 species of perennial herbs, shrubs and trees.

The bottom line for our local ecotype native plant production is only limited by the number of volunteers that we can muster.